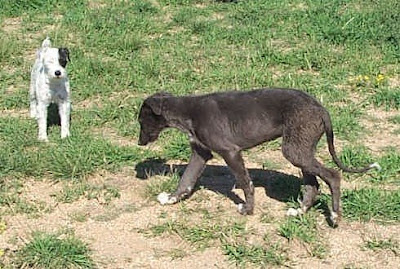 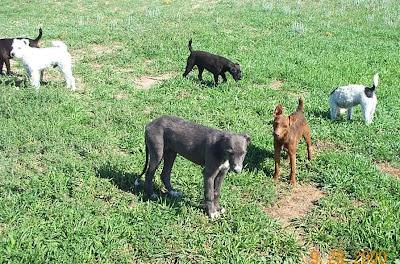 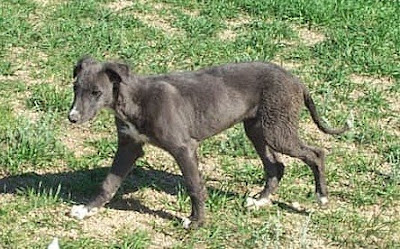 Before Scorch had passed away, I had planned at some time to breed her to a friend of mines hound named H. Yep, just H. He is a well put together coyote hound. Nothing exceptionally exciting to look at except when he is coursing a coyote. Even at nearly 12 years old, he is an amazing hound to watch. I had the privilege of a hunt with both Scorch and H last winter when my friends from Missouri were out for a visit. That convinced me that H needed to be the sire of a litter of pups with Scorch. Unfortunately, that never happened. In talking to my friend Jon Ware, who owns H, he mentioned that he had a litter of pups by him. There is an ash blue colored bitch in that litter that no one wanted but Jon said she was his pick of the litter of the bitchs. Well, if I couldn't have a pup from Scorch, this seemed like the next best thing. Jon said nobody wanted her because of her color. They took all the males right off and then the brindle colored and black bitches. Jon was amazed that she was left. Now I trust Jon's eye much more than mine and he was convinced that she was going to be a terrific coyote hound. Well, we talked a good deal and worked out what we needed and I made the trip to Wyoming to get this little gal. She is growing like a week and is a pleasure to be around. Still trying to come up with a name for her but I am real pleased with what I see so far. She is nicely put together. Great feet and bone and if she is half of what her father is, I will be a fortunate man to have her.
Posted by Mike Bilbo at 5:35 PM 2 comments: Seems lately I spend more time writing memorials to my terriers and hounds than I do writing hunting stories. This girl is one of the best dogs I have ever had. She died on Saturday the 12th of July, '08. Apparently suffered a heart attack as a friend was setting up a lure coursing event and she was watching. Much to the horror of 10 people that we had over for a BBQ that watched myself and several other people administer CPR on her for about 20 minutes all to no avail. Scorch passed away suddenly on a beautiful Saturday afternoon. Scorch was my buddy and constant companion and was always with me. She had saved me from a pack of problem stray dogs that were bent on chewing me up one time and poured a serious can of whoop ass on several of them just as they were about to reach me. She hit them like a bullet train from Hell out of nowhere and sent them flying. She was an absolute marvel to watch coursing game, whether it was a Coyote or a Jack Rabbit. She brought them all down and loved what she did so well. One time on an organized NOFCA hunt, she managed to slip her collar and raced out and right over the top of the hunt hounds and caught the hare. The Hunt Master was really pissed at me and marched right up to us and informed me she was going to fine me. I paid her the $5 and took her back to the truck. She coursed 2 additional hares on the way back. It was really a great day out hunting. There are so many memories with her that I could write pages of stories but will leave it simply as she was a wonderful hound to have and was really what kindled my interest in running hounds and was the very best hound that I could have hoped for. I miss her more that words can express.

For if the hound be well remembered, if sometimes she leaps through your dreams, actual as in life, eyes kindling, laughing, begging, it matters not where that hound sleeps. On a hill where the wind is unrebuked and the trees are roaring, or beside a stream she knew in puppyhood, or somewhere in the flatness of a patureland where most exhilarating horses graze. It is one to a hound, and all one to you, and nothing is gained and nothing lost - if memory lives.
But there is one best place to lay a hound to rest...
If you bury her in this place, she will come to you when you call, come to you over the grim, dim frontiers of death, and down the well-remembered path and to your side again. And though you may call a dozen living dogs to heal, they shall not growl at her nor resent her coming, for she belongs there.
People may scoff at you, who see no lightest blade of grass bent by her footfall, who hear no whimper, people who have never really had a hound. Smile at them for you shall know something that is hidden from them.
The one best place to bury a good hound,
is in the heart of her master...
Posted by Mike Bilbo at 5:36 PM No comments: This is a serious condition which you need to be aware of not only while hunting your hounds but there are a lot of people that participate in other forms of recreation with their running hounds like lure coursing or even playing in a dog park. Traveling with your hound, even on short trips where you make a quick stop for coffee or a drink. Be aware of the temperatures your hounds will be subjected to. Become familiar with the symptoms of Heat Stroke and get treatment to help a dog in distress very quickly. Their lives will depend on it and on you to help them. Now that the hunt season is over for most of us it should be time to look your hounds over for a little work. Most of them tend to suffer minor injuries while hunting and may be anything from a muscle strain to broken nails or more serious.
Some Things to Look For
At the end of the hunt day, I examine my hounds from front to back looking for signs of problems. A hound walking without a limp is not necessarily a sign that all is well. Looking for cuts and or abraisions is an obvious thing. Important to these running hounds is solid feet condition. Cuts on their pads or between their toes is something to look for. Hard turns in the field will cause the stopper pads to blister off or wear off and this can be a painful condition to them. If the weather had been wet, their toes can become impacted with mud and if this is not removed can dry there and become very painful and rub sores between their toes and could have them out of running condition for several weeks. Broken or cracked nails is a big issue. Please take the time to trim your hounds nails and keep them at a normal length. The longer they get, the more prone they are to breaking. Dew claws are a constant problem. For the life of me, I don't know why more breeders don't have them removed as small pups as this would avoid numerous problems with the working sighthounds as adults. Cactus or burrs like the goatweed burrs will be very painful to your hounds too. Look them over carefully and remove them whenever you find them. It is a good idea to carry a good old Leatherman Tool with you for this purpose as extracting them with your bare fingers will usually result in getting them out of your hounds feet and into your fingers! My hounds seem to think they know the fastest way through a fence or around some other obsticles when coursing some game which usually results in some minor flesh wounds. If these are not looked after, they can get more serious and why risk a good hounds health just because you did not take a few minutes to clean these wounds up. A little scrubbing with some Betadine solution or chlorhexidine gluconate antiseptic should help. If you have to install sutures or staples to close a skin flap, always make sure that you leave the bottom end of it slightly open to allow drainage. Keep in mind that I am not a Vet and so a serious wound should have a Vet's examination. Another field neusance to the running hound is the yucca. These pesty plants have the leaves or stems ending in a very hard and sharp point like the end of a dagger or spear. Hitting one of these at speed will produce some very painful sores when poked and the tips of these plants break off in a leg bone or the chest of your hounds. They are tough to remove too. These are just a few items to look over. If you are involved in any type of hunting sport, your equipment will require maintenance. Take the time to do this for your hounds and it will pay big dividends over the course of the hounds hunting career.

Need A New Home For Dottie This is a 14 month old Staghound female that is needing a new home. She is house trained, good on a lead and in the car. Gets along well with small dogs as she lives with a Minpin and a Jack Russell. She just needs more room to run and a home where someone will be with her for more of the day. Both owners presently work and she is confined to either a crate or a small room in their house. She is so excited to get out when the owners get home that she has been knocking down their small children when running around the back yard. Husband is unhappy about it and says she must go to a new home. She is quite game and loves to course rabbits and has even pointed gamebirds. Must be some pointer in there someplace. She is spayed and in typical sighthound fashion had broken her constantly wagging tail and it had to be removed recently. She has not been left unattended for long periods during the day in their yard as she has shown an ability to scale tall fences. Currently in Cheyenne, WY. I am in Denver and will be traveling to Eastern Kansas within the next few weeks and could assist with transport that direction.
Posted by Mike Bilbo at 8:45 AM 2 comments: