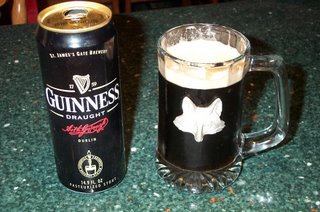 One must look after oneself after rigorous exercise in running the hounds. I just got back in and am following my own advice.
Posted by Mike Bilbo at 8:05 PM No comments: 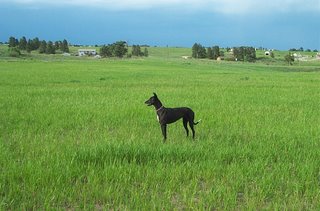 It was 2 seasons ago when I had my first opportunity to hunt with some people that take coyote hunting seriously. A friend that is a wheat farmer was talking to me about a guy that came to his farm to hunt occasionally with the Staghounds. I was all ears. He passed along his name and number and I gave him a call. Suspecting that I might be an anti, he was cautious in our conversation at first. We visited awhile and at the end of the week, he surprised me by calling me to tell me that he was planning a hunt early that Saturday morning. Even better, he asked if I would bring Scorch, my smooth coated bitch along to see how she would do hunting from a drop box on a truck.
At the agreed upon time that Saturday, I was there bright and early. It was a late Fall day and had rained and snowed a bit the night before but not cold enough to freeze the ground. Unfortunately, that made things pretty muddy, which is not what you want as the ground was very slippery. I loaded my girl in the box with 3 of his males and I am sure she though I had lost my mind making her get in the box with all the males. His males were a grizzled pack with scars from a few seasons of hunting evident on their muzzles and faces. We were loaded and in the truck we got. I noticed a big grab bar like you would see in a handicapped bathroom someplace. He said hold on and I was likely to need that bar before long. We set out across a wheat stubble field slipping and sliding in the mud. We were driving toward a shallow draw that ran some 2 miles along side the wheat field we were in. About half way up this draw a coyote just jumped out of the draw and was running flat out across the wheat field. The driver stood on the gas and was after it. To my astonishment, we were not catching this coyote but in fact were loosing some ground in the chase. We were pursuing this amazing canine for about a mile listening to the hounds in the back screaming with excitement as they were watching the coyote running from us and were anxious to get loose when the driver uttered a few choice words and stood on the brakes. When the truck had nearly stopped he pulled a lever at the top of the cab and out came the hounds. They exploded out of that truck like a group of Stinger missiles with a radar lock on a Bogie. To my pleasant surprise, Scorch was right in there with them. They were closing on this coyote at incredible speed. The coyote made some good moves and had the lead hound overrun him twice but then he caught up and rolled the coyote. Within a second the rest of the hounds were on him and he was finished very quickly. All four hounds, including mine had this animal and the whole event which seemed to take place in slow motion was actually over within 45 seconds or so. This was a young dog coyote about 40 lbs in size. None of the hounds took any bites and so they were loaded back in the truck and off we went to find another one. About half an hour later, we flushed another one and the chase was on again. The engine was roaring and the hounds screaming with excitment. This was a much larger male coyote and he had the speed and condition to stay ahead of us in the mud. The race was on as he was heading for a fence and large pasture full of buffalo. Unfortunately, he managed to stay far enough ahead of us to make it thought this fence and he ran out in the middle of this herd and stood there and gave us the paw. A large bull cut his gloating short and ran him out of their territory. We did not want to release the Staghounds into this area where we could not readily go get them because of the buffalo. About an hour later, still sliding in all the mud we manage to get another coyote on the run and the same chase took place. The hounds caught this coyote. One of the males took a good bite in the foot and the owner was unhappy as this could result in a month of no hunting while the injury healed. All in all, it was a very exciting day for my first experience with these amazing running hounds. As Fall draws near, the conditioning of the hounds is high priority as the hunt season is just around the corner. I don't have a picture as the guy I went with did not want photos taken. If anyone has such a photo I would like to publish it here.
Posted by Mike Bilbo at 6:26 PM 2 comments:

Strike, The Next Generation of Staghound 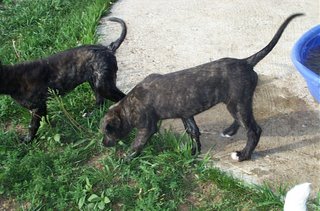 This is Strike. He is a keen 9 week old pup from the litter I have been posting here. Out of the 11 pups, he was the smallest male of the 6. Every pup in this litter is excellent and has a long pedigree of coyote hunting ansestors. We have 1 male and 4 females left in this litter. Why did we select Strike over the other pups? No special reason other than he just seems to love to run. Will continue to post photos for people to see. If you have photos of good hunt hounds or hunt pictures, email them to me and maybe I will post the story and photos here.
Posted by Mike Bilbo at 11:42 AM No comments: 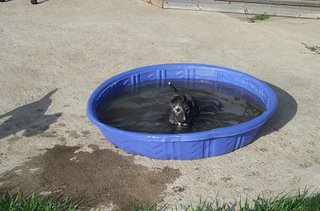 We believe in firm discipline combined with a strict training regiment for young hound pups. Don't spoil them but get them used to the harsh realities of a hunting life
Posted by Mike Bilbo at 11:36 AM No comments:

Grassroots action by the U. S. Sportsman's Alliance and California outdoorsmen has blocked a bill that threatened hunting dog competitors and field coursers. Assembly Bill 2110, which sought to outlaw open field coursing competitions, did not move out of the Assembly Appropriations Committee on May 25. The bill's sponsor, Assemblywoman, Loni Hancock, D-El Cerrito, failed to garner enough support among the committee members, which prevented the bill from reaching the Assembly floor. The U.S. Sportsmen's Alliance (USSA) invested thousands of dollars on a series of mailings and e-mail alerts to sportsmen in key legislative districts. The USSA supporters were urged to turn the heat up on assembly members who had not committed to protecting sportsmen's interests by opposing AB 2110. The Masters of Foxhounds Association of America and the United Kennel Club also sent mailings to their California members in specific legislative districts, alerting them to the dangers of AB 2110. They were urged to call lawmakers and describe the bill's impact on sportsmen and it's financial impact on local law enforcement. "Stopping this bill in California shows just what kind of success sportsmen are capable of at the grassroots level, " said Rob Sexton, USSA vice president of government affairs. "Groups like the California Houndsmen for Conservation, North American Coursing Association, Southwest Coursing Club, Brynmair Irish Wolfhounds, San Joaquin Sighthounds, National Open Field Coursing Association, California Hawking Club, as well as the California Waterfowl Association were essential in stopping this dangerous bill." USSA board member Natasha Hunt of Coalinga, California was also critical in raising sportsmen's concerns about the bill among the legislature. She, along with lobbyist Bill Hemby, a former California law enforcement officer, raised awareness about the unnecessary strain enforcing the bill would have placed on the law enforcement community. "Sportsmen can be proud of their efforts in California, " commented Sexton. "Not only have they helped to preserve coursing, but they have helped slam the door on other
anti-hunting legislation that might have been brought up had AB 2110 passed."

Support the U.S. Sportsmen's Alliance
Posted by Mike Bilbo at 10:52 AM No comments: