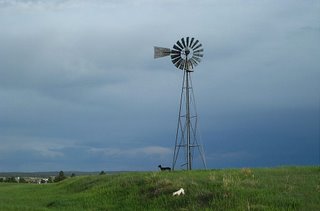 It was one of those warm summer evenings when the afternoon thunderstorms are cracking in the distance and it is still 85 degrees out. The Staghounds and Terriers were restless and wanting to go for a walk. My 2 Staghounds, Scorch and Taz along with 3 or 4 terriers started walking out from our inside gate. The terriers are good at ferreting out rabbits and the Stags patiently wait for an anticipated bolt. It wasn't but about 10 minutes and the terriers had one on the run. The hounds were quick to pick it up and the chase was on. To my surprise, the little cottontail ran straight into a small bush and a fox had him. A moment later, the fox realized that this was not a gift and decided he better get out of Dodge. Unfortunately for the fox, Scorch had a lock on him and had the speed momentum advantage. He was in her grip within 30 to 40 yards. A moment later, the terriers caught up and Mr. Fox was hunting rabbits in heaven. This fox had been stealing my neighbor's gamebirds for the past few months and I am sure he was happy to hear the fox was gone.
Posted by Mike Bilbo at 4:56 PM 1 comment:

I had someone ask for an update on the progress of Mace. She had been kicked by the horse 4 weeks ago this Thursday. She seems to be making remarkable progress. She is still a bit slow in her reactions but is practically normal in every other respect. She has gained most of her normal weight back and is able to run again. She seems to feel good and is back to her happy self, hopefully ready to hunt this fall. I am taking her out for an outing this Saturday to see if she can focus on quarry. Thanks for all the inquires and I'll keep you all posted.
Posted by Mike Bilbo at 7:49 PM No comments: 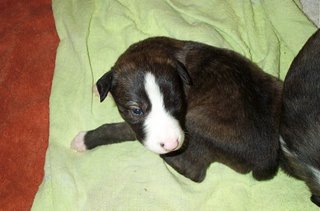 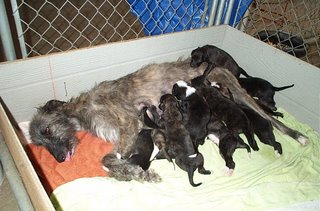 I am sure this may be boring to a good number of people that are looking for hunt stories and so on but I have a large number of people that just want to see a few
current photos and this is a convenient place to post them. Pups and mother are
all doing well. Puppies have their eyes open and are gaining weight quickly. Most are 2-1/2 to 3 lbs and they are starting to walk.
Posted by Mike Bilbo at 6:09 PM 2 comments: 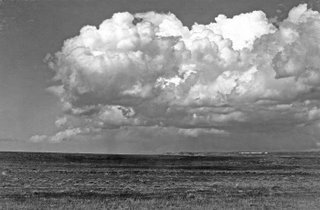 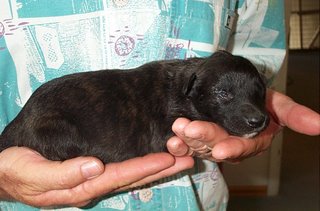 This is a picture of one the Stag pups we call Ridge. she has a ridge of hair from the crown of her head, down to her shoulders. This is a female. They are 12 days old today. This little gal had a minor eye irritation that seemed to be getting slightly infected. Cleaned it all off and put some triple antibiotic in it and it seems to be doing fine this morning. She weighs in at 2 lbs. All the pups seem to be doing great. The mother is eating enormous quantities of food. Keeping up with milk production for 11 pups is a job so I feed her as much as she is willing to eat.
Posted by Mike Bilbo at 9:25 AM No comments: 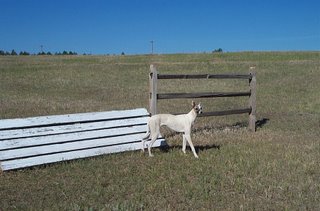 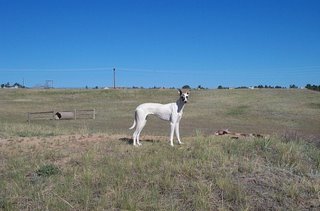 This is a newer Staghound that I have had for about 8 months now and she will turn a year old next week. On the first of this month, she was kicked in the head by one of our horses. My wife Darlene found her laying in a fenced area behind our kennel. She was unconscious and not breathing. Her tongue was dark blue and she was bleeding profusely from her mouth and nose. When Darlene picked he up, she began breathing with difficulty. With severe head trauma, I was told you go by the 4/3 rule. If they live for the first 3 hours, it is a good thing. Then you give them 3 days and if they make improvement, you give them 3 weeks. If you have noticeable improvement over 3 weeks, then you give them 3 months. After 3 months they will be as good as they will ever get, so hopefully, they will have completely recovered. She could not sit up for the first day. Then she had trouble standing by herself. After the 3 days, she was attempting to walk but was dragging her back left leg. We did Xrays and there was nothing broken. All neurological damage. She would not eat for the first week and looked like she was going to starve to death. She is back to eating and beginning to gain some weight back. Looks to be on the road to a full recovery which is hard to believe considering how badly she was hurt. Hopefully this fall, she will show me that she can perform 100% and be back in match grade condition.
Posted by Mike Bilbo at 8:58 AM 1 comment: 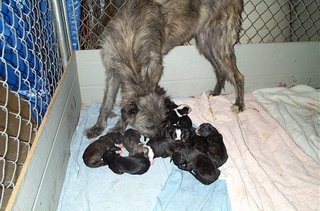 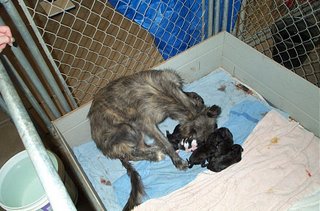 All the pups seem to be doing well and are gaining weight. They are only 6 days old but are already beginning to develope their own personalities. Some are much more aggressive eaters and scream like crazy when they know
Mom is close by and can not reach her for nursing. There are 6 males and 5 females.
Posted by Mike Bilbo at 11:07 AM 1 comment:

An interesting story of a man that loved his sighthounds.
Not sure how true this is as I am sure that a good portion
of this has been embellished for the sake of making a good story.

What Not to do While Riding Your Horse Alone at Top Speed Beside a Raging Buffalo.

After all this Fairy tale and Lie swapping you can see the kind of stress our boy Custer had been under. He is certainly now a candidate for some rest and relaxation as his cavalry cavorts across the plains. Though such wasn't=t in the Plan of the Day it did present itself when Custer spies a lone buffalo out among the sagebrush. And though Custer had never seen one of these huge shaggy beast before he was surly an expert on them.

When our fearless leader spied the bison he had already sprinted his horse across the plains in pursuit of some antelope. With him is only his chief bugler and George's pack of English Greyhounds. Of course these Custer canines set up a long chase of the fleeing antelope, with Custer and the horn blower quickly bringing up the rear.

After running a few miles, which left the bugler's horse played out our bugle boy drops out of the race, leaving the general alone on the vast plains with only his horse and dogs and the pistol he has cocked and ready in his grasp. This is when Custer spies the buffalo.

Understandably, when George sees this lord of the plains he forgets all about hostile Indians that might be lurking around. He forgets about his command that is now several miles to the rear, out of sight and out of shouting distance. This perfect military machine forgets all, except the buffalo he and his faithful dogs are attempting to sneak up on.

That buffalo must have been smarter than it looked or its sense of smell was offended because as soon as it detected the intruders it took off faster than a bullet sliding through butter.

Now Custer wasn't going to let this prize slip between his fingers, including the one on the trigger of his loaded pistol. So off he dashed on his trusty horse with his slavering hounds keeping pace.

Mile after mile hoofs and paws pound the prairie until Custer's horse and the buffalo are running neck and neck. They go so far and run so fast that eventually the Greyhounds call it quits.

The hot prairie sun is beaming down. Dust and sand is flying. And still they rush onward. Custer is now so close to the buffalo that at any time he could reach out his gun and plugged that beast but he is too caught up in the excitement and desires to prolong the episode. But, at last, the buffalo begins to falter. Of course, Custer=s horse is still going at top speed, never giving an inch.

At last old Mr. Buffalo must have figured out that he was a goner if he didn=t do something quick. In defense, he wheels around with the supposed intention of inflicting a serious big horn puncture wound on Custer's horse.

The action was so sudden and startling that Custer felt the need to grasp the horse=s reins with both hands in spite of the fact he still had the loaded and cocked pistol in one of them. But never the less he clamps a tight‑fisted grasp on the reins, no doubt forgetting his finger is on the trigger of his pistol.

When the gun fired it was probably the loudest sound that horse had ever heard. It was definitely the last sound the horse ever heard.

General George Armstrong Custer had sunk a bullet into the brain of his horse while riding it at top speed across the empty hostile plains while an enraged buffalo was calculating an epitaph for man and mount alike.

Custers crumpling horse put a whole new definition on the expression "Dead in its tracks". At the same time Custer demonstrated his gymnastic ability by catapulting him self into the air. It was such an unexpected performance that it must have startled the buffalo, or disgusted him, that he turned and trotted off into the sunset. Well, if it had been a Hollywood movie there would have been a sunset, except in this instance no one kissed the horse.

History indicates that George Custer was eventually reunited with his regiment and continued to make equally superior military decisions.

To read more about General George Custer and the 7th Cavalry on the Internet, please see:

Elizabeth Bacon Custer http://www.geocities.com/CollegePark/Classroom/1101/Custer_Forever.html here is the complete text to ABoots and Saddles.@ This is the memoir Mrs. Custer wrote about her life with the general.

The major sources for this 2‑part article are:

Deloria, Vine. Custer Died For Your Sins, published by Avon Books of New York, NY 1970.
Posted by Mike Bilbo at 10:42 AM No comments: 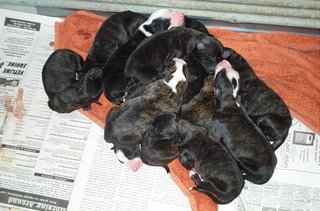 Picked up a Staghound bitch for a friend of mine June 8th. We had made arrangements for me to whelp the litter since she was pregnant and was due soon. The current owner was just too busy to put up with a litter of pups.
I was guessing she would have them over the weekend of June 10 / 11th. Well the man called me on Wednesday the 8th to say she had the litter that day. How many? I asked. He said 7. I was happy as that is a manageable number. I made the drive down to Pueblo on Thursday the 8th. He in the mean time had left me a voice mail saying that she had one more pup since we talked last. I arrived about 11:00 am, Thursday. He greeted me with a smile saying she had a couple more. Went to his kennel and there were now 12 pups in the litter. They all seemed healthy. 6 males and 6 females. One of the males had some contracted ligaments in his front legs that would not allow him to straighten his feet. My vet said this is common in Greyhounds and sighthounds and we had to put him down. The rest seem to be doing fine. Pouring all the groceries into the mother she is willing to eat so that she can keep up with milk production. 5 nice males and 6 nice females left. Hopefully they will all remain strong and healthy and grow up to be great hunting hounds that will make their owners proud.
Posted by Mike Bilbo at 2:23 PM No comments: